I went to NY/NJ

As I alluded to yesterday I spent some time in the NYC metro area last week. Did I mention I left on Wednesday? Yup, just in time for a big nor’easter to pass through the region. Some of you out there might not believe this was coincidence but it was! I swear! I’ve had about enough of snow and leave it to my luck that the CNY came through the storm unscathed. I am human snow curse I suppose. That being said it was interesting to see how NJ and NYC handle eight inches of snow.

As usual with these trips I saw many things that I didn’t photograph and what I did photograph is not all that I saw. Starting around Scranton the snow begin to fly heavy. PennDot was at each turnout with one or two trucks just waiting for a flurry to pass through. Once I hit the Delaware Water Gap is when things got crazy. Unlike Scranton the snow wasn’t sticking but that didn’t stop the contractors from being called out in force. At each exit rows of Peterbilt and Kenworth dump trucks that would seem more at home at Englishtown waited with drivers in cab for the weather to turn.

Further down the road in Old Bridge, NJ the snow was starting to fall at a decent rate but still not enough to stick. Passing by a mall on RT 9 I came across a vertiable fleet of Mack drump trucks just chomping at the bit to hit the road. A few miles down the road at another shopping center the cycle was repeated but this time the trucks were of the mixed variety. My favorite was the single axle S-Series International garbage truck still sporting the Temple University logo. I would later to get see it action but it was to dark for any photos. Just add it to the ever growing pile of regrets. 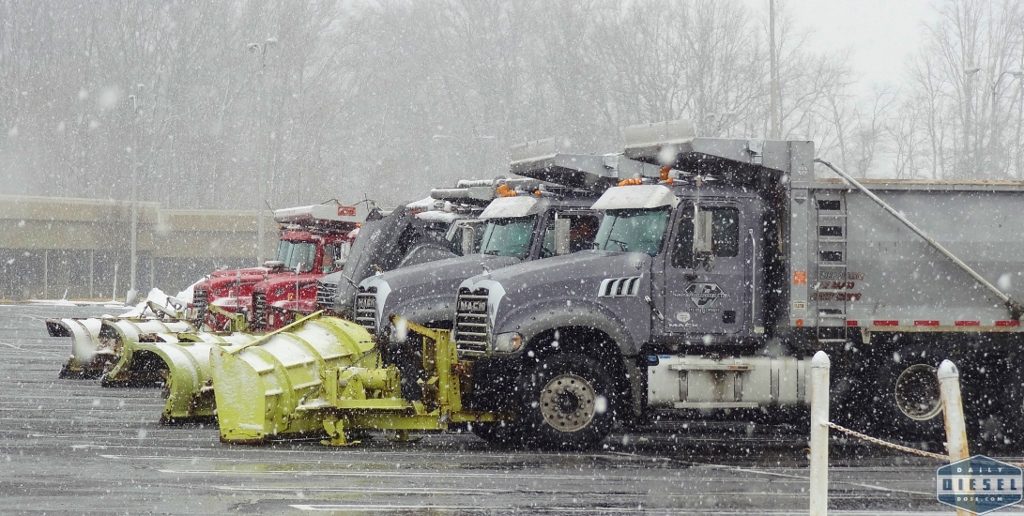 By the next morning the storm had passed and the streets were basically clear. Good job NJ! At some point in the night this rig from J. Supor and Sons showed up on the parking lot of my hotel. 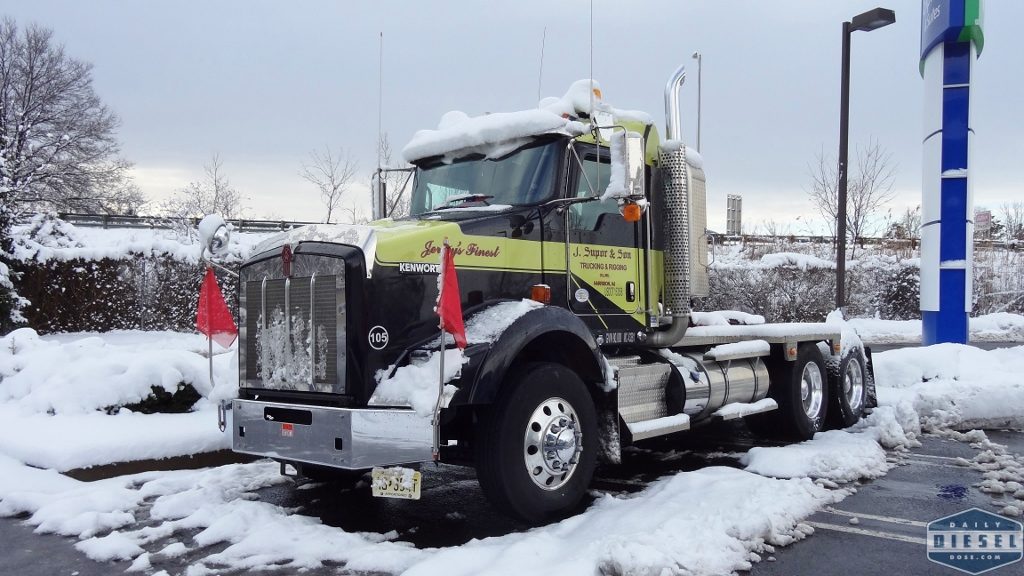 Heading into NYC that morning I saw plenty of DSNY garbage trucks with chains (buses too) plowing nearly clear streets. By the end of the afternoon the plows were already coming of the trucks and life was returning to usual for Big Apple. Here we see a fleet of DOT trucks on Staten Island. Photo credit to my wife. 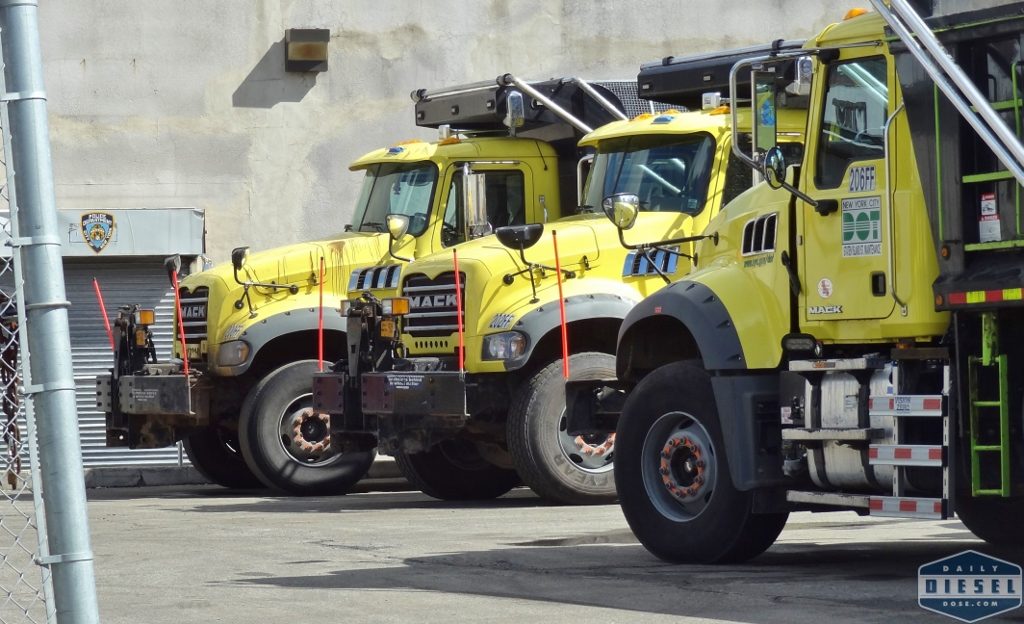 Taking the ferry back and forth between Staten Island and Manhattan was a great way to see the city. On one of the trips I noticed the entire inside of the ferry was painted that industrial green color so popular on truck and heavy equipment of the 60’s. Turns out I was riding on the John F. Kennedy, the oldest ferry in the fleet. No surprise it was the fast and quietest journey of the entire trip. It’s scheduled to be in service until 2020 and is now the inspiration to the new fleet of ferries currently under design. Long live the old iron on both land and sea. Speaking of Staten Island, there was a steady stream of large cars heading out from the docks carrying road salt. 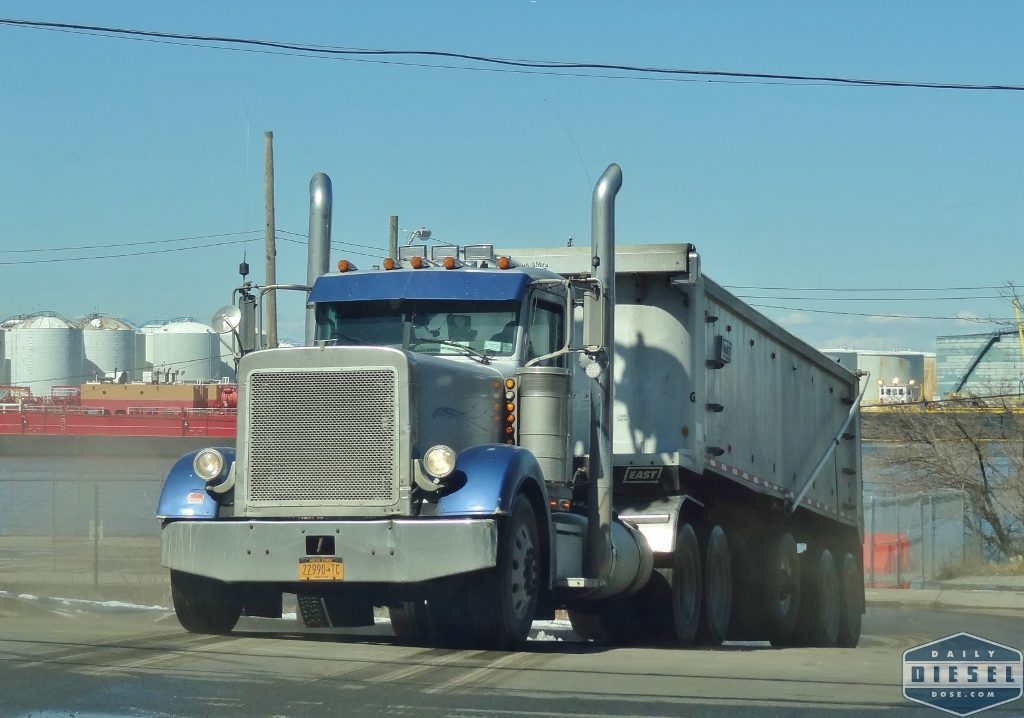 And of course there was so much more. I wasn’t even looking for trucks on a hardcore level but there are nearly everywhere. Even in the heart of Manhattan you can find an International Eagle with straight pipes. Truly the greatest city in the world. 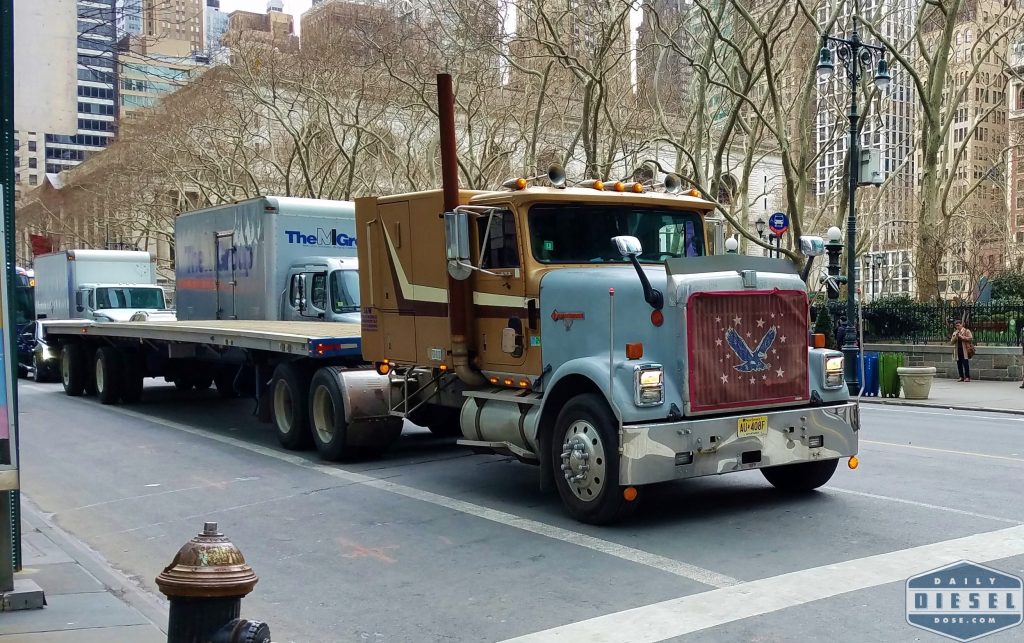 Just imagine what I would have seen if I had actually gone down for truck spotting?

[Show as slideshow]
This entry was posted in Snow Plows. Bookmark the permalink.