A few weeks ago I received a great email from long time DDD fan Spencer. For some reason it was lost in the shuffle. I’m not sure why as it contains a great story about some classic trucks. You may recall that Spencer is attempting to restore his grandfather’s International RD-220. You can read more about it by clicking here. As fate would have it more of his grandfather’s fleet was just found during a back roads cruise.

Until this accidental discovery no one knew what had happened to these two Brockways. The only thing known for sure was that the both trucks were not sold as a pair. Somehow over the years the two Huskies found each other and have been resting in the same field ever since. 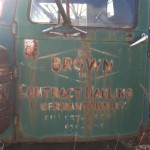 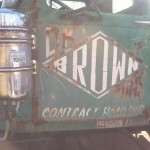 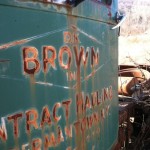 Not shown in the photos is something that will interest the hardcore Brockway fans. According to Spencer one of the trucks is wearing two Husky ornaments on the hood. Possible Husky Drive? More details are to follow!

Thank you for the great photos Spencer!

This entry was posted in Lost and Found and tagged brockway husky drive, brockway trucks. Bookmark the permalink.

2 Responses to Lost and Found – The Brockway Truck Duo!