Living in the rail community that I do it’s a near crime that I don’t have more rail related material on this site. I’ll never reach the heights of seasoned train spotter but I hope this video makes up for past negligence when it comes the steel ribbon that binds this country together.

For most of the summer I’ve observed increased Maintenance of Way (MOW) activity on the lines that cut right through East Syracuse. Usually I could only catch glimpses of the activity from overpasses or through breaks in the weeds. Yesterday while taking a morning walk I figured I cut down the street that offers one of the closet views of rail activity that you can get in the area. Tada! I found the armada of MOW equipment responsible for endless horn toots and backup alarms. Nearly twenty pieces strong it was hard to tell what was going on a first but an eventual method to the madness was revealed.

Prior to my arrival some piece of equipment had identified what rail ties needed to be removed while also removing the spikes holding the tie to the tie plate. Behind this machine an mini excavator with a magnet collected odd scrap metal pieces include ties, tie plates, air couplers, and even a shopping cart.

For awhile it looked like nothing was going to take place but soon the din of diesels, horns and backup alarms grew louder and louder with each passing second. That’s when this machine appeared.

It seems complex and I suppose it is but in reality it is only doing two things. Lifting the track and pulling out the old rail tie. Yes, you read that right, it lifts the track and while doing so produces a funny sound all the way down the line.  The video below really doesn’t pick it up but it’s very similar to that of spring rebounding after being pulled taught. Behind this machine two workers follow on foot with hooks to replace the shifted tie plates.

After the ties have been pulled two boggie mounted excavators stack the old ties for removal and setup the new ones. Next a sweeper moves down the line to remove any loose ballast.

After the ties have been staged a machine identical to the one seen above moves in to do the exact opposite movement that took place while removing the tie. Once again the track is lifted and the tie is muscled into place. After placement two smaller cars with operators walking along side the machines approach. These machines are also capable of lifting the track and assist the workers in placing the tie plate under both sides of the rail. After all that work it’s time to lock the rail and ties back together with a giant hammer. The very same machine that killed John Henry.

If you watch the video closely you’ll notice a row of spikes hanging from a belt just waiting to be dropped into place. Two of the machines were onsite and were often busy laying spike at the same time. 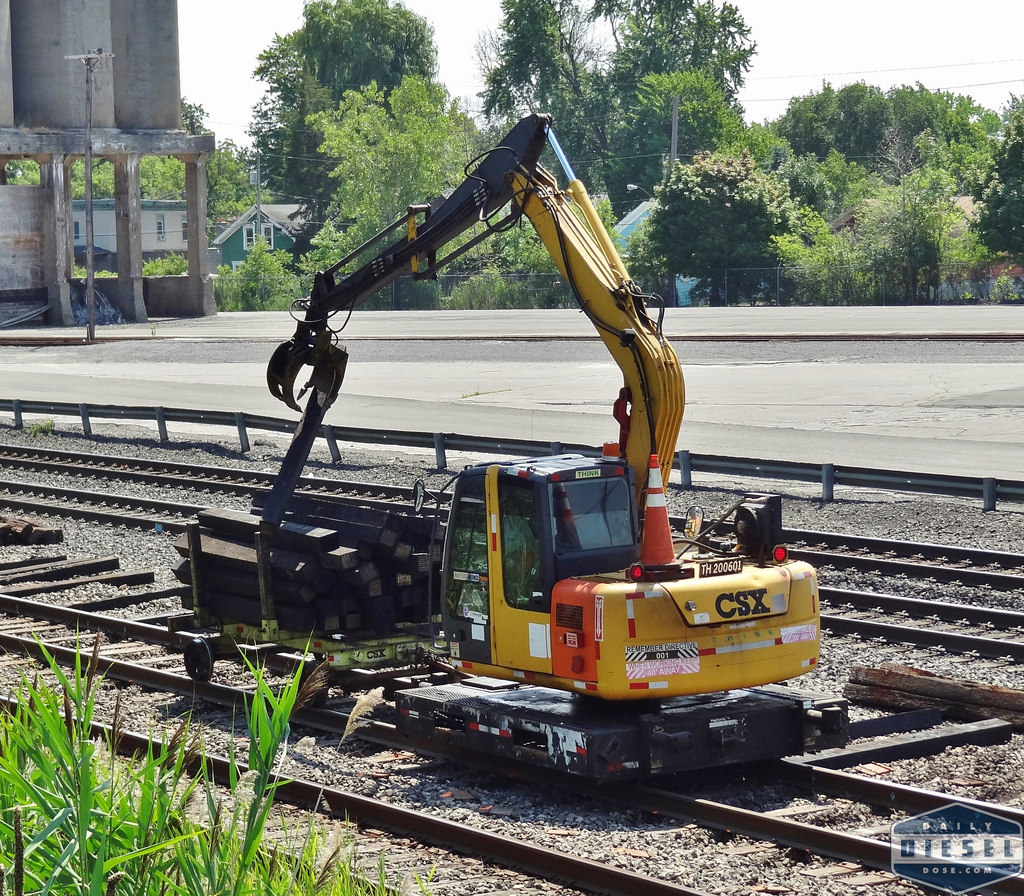 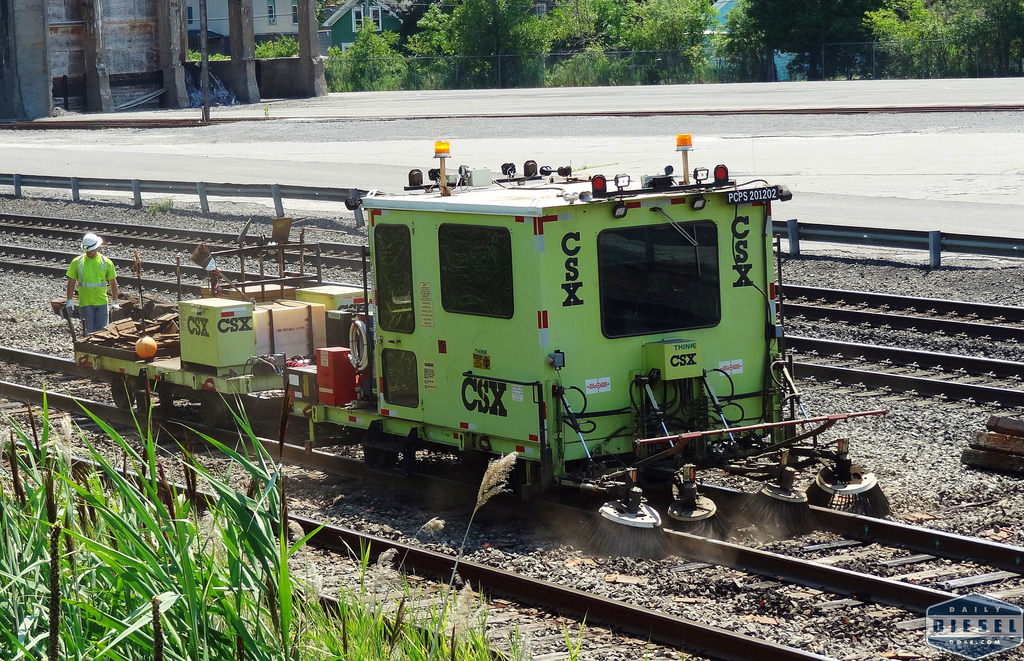 For years I have seen this lime green pieces of equipment and also wondered exactly how they operated. The veil has been lifted. Wonder no more!

This entry was posted in Heavy Equipment, On the Job and tagged csx, east syracuse, Maintenance of Way, mow equipment, rail tie replacment. Bookmark the permalink.