What Should Have Been

Just about two years to the day that I took the photo below I ran a post on this site about the cleanup of Onondaga Lake, one of the most polluted lakes to be found in the continental United States. It was a massive project with a variety of fronts but the largest belonged to the dredging and capping of the lake floor. Over two million cubic yards of contaminated soil was dredge and pumped to a consolidation area located on former Allied Chemical wastebeds. Another 450 acres of lake bottom was capped with a variety of material to effectively seal in a variety of heavy metals and other toxins. All this meant there were barges with cranes and diggers, a never ending stream of dump trucks hauling stone, and always something to be seen nearly seven days a week. The project is now mostly finished so the question must be asked. Why was there so little footage? I guess I dropped the ball on this one. To be fair, it’s was difficult to get decent shots when the main action took place between an active construction zone and a four lane highway.

The barge you see below was one of many that floated around the lake depositing large pieces of stone and soil to help lay the lake floor cap. A large floating pipe carried the material from pumps on the shoreline.

Trucks like this one from Riccelli Enterprises made a seemingly endless loop between the barge loading areas and the material stockpile areas.

Maybe it’s better that I didn’t capitalize on one of the worst mistreatments of the local environment in recent history. What kind of person would that make me be if I had? 😉 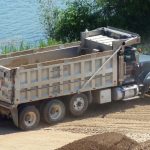 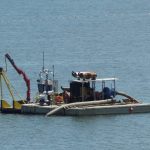 This entry was posted in On the Job and tagged onondaga lake cleanup, riccelli enterprises, sevenson environmental. Bookmark the permalink.