On the Job – American Auger and Ditching Co.

Two days ago I was heading home from work when I passed the International you see below while it was heading in the opposite direction. At the time there was a large steel pipe strapped on the back. I thought to myself “Gee, I wonder where that is heading?” and then I promptly moved on and forgot about it. The next morning I was taking a walk before work when I happened to stumble across the International and its buddy the Versa-Drill.

Drilling through a city street that has seen some sort of human development for over two centuries must be one hell of complicated job. I can only imagine the maze of old pipes, utilities and other detritus that lay beneath the surface. 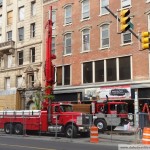 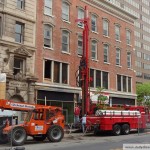 I Took a stroll during lunch today and came across the AA&D crew now working on the backside of the Pike Block Building referenced in the earlier version of this story. This time I was able to get as close to the machine as I wanted without having to peer through a fence in the middle of Salina Street. 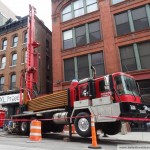 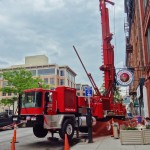 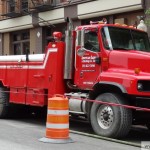 I was able to watch of a few minutes of the drilling process. There is an automated arm on the boom that sweeps in and grabs a new section of pipe when needed. Effortless.

This entry was posted in On the Job and tagged american auger and ditching co., international 9900i, pike block, syracuse, versa-drill. Bookmark the permalink.